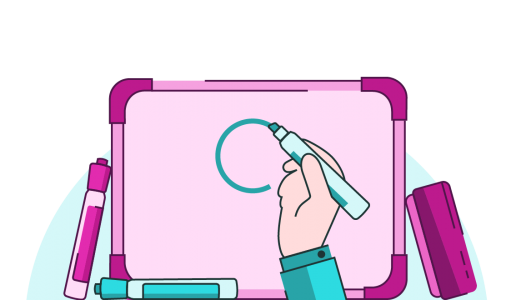 When companies attack PowerPoint, we’re pretty relaxed because the criticisms don’t tend to apply to what we do. Lots of people do use PowerPoint badly. We know we use it well. But the claim by proponents of whiteboarding is that PowerPoint is dull and text-heavy, and that using a whiteboard instead promotes visual communication.

Often people claim that PowerPoint is awful, and assume that other presentation technologies and techniques are some sort of panacea. Prezi with endless bullet-points only stops people from falling asleep because they end up feeling nauseous instead. Keynote may look a little prettier than PowerPoint by default, but has nothing like the same animation capabilities. But whiteboarding enthusiasts are positioning their presentation tool as the answer not only to bad presentations, but to visual communication.

However, just because you give a whiteboard presentation doesn’t mean you avoid boring text-heavy communication – you may just be swapping text-on-slides for text-on-paper. Sure, you get to turn your back on the audience and write the bullet-points – but that probably doesn’t make them any better.

The key text in this emerging field is Whiteboard Selling by Corey Summers and David Jenkins. The book contains a clear articulation of the benefits of whiteboarding for sales presentations. But looking through the examples, I couldn’t help but question how visual some of the whiteboards shown as good practice actually are. I found myself asking

Are the whiteboards in Whiteboard Selling truly visual?

To find out how visual the whiteboards really are, I counted three things in the eighteen whiteboard examples in the main part of the book (‘What exactly is a Whiteboard for Sales’, which is over 40% of the book by page-count):

Of the eighteen whiteboard examples in this large part of Whiteboard Selling, across the range of whiteboards recommended by the authors, I counted 380 lines of text, 12 essential images or visualisations, and 68 decorative (or non-essential) images. (Note that I didn’t count an up-arrow or down-arrow, which were used as shorthand for increase or decrease, but which weren’t particularly visual.)

So, in the example whiteboards given in the key part of Whiteboard Selling, I counted an average of 21.1 lines of text, 0.67 essential images, and 3.77 decorative images per whiteboard.

Whiteboard presentations can be great. Whiteboard Selling is an interesting book, tackling a fascinating topic. But don’t believe the hype – use your eyes.

Just because a whiteboard is written by hand, that doesn’t make it visual. 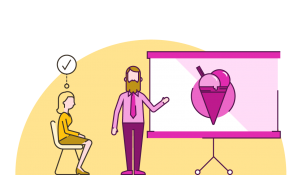