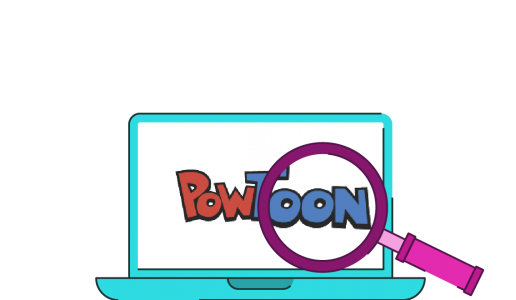 In the last few years, the number of websites that allow the user to create narrated slides that can be exported and shared on multiple devices have increased dramatically. However, these websites all share a common goal – to get users to switch over from using PowerPoint. But can they actually serve as an alternative or are they getting ahead of themselves? I decided to answer my own question by reviewing Powtoon and pitting it against our beloved PowerPoint.

Powtoon is a platform in which you can create animated presentations for free (although their features are limited in the free version) that can be combined with narration, music or embedded videos. Powtoon seems to be squarely aimed at marketing – a quick, intuitive way to create simple but effective message bites, which is why the majority of the examples they provide on their website are movies instead of slide decks.

To start making a presentation on Powtoon you click ‘Start Now’ and you are given the option to work with either a ready-made Powtoon, or to start from scratch. There is also an option for making Dynamic Presentations, but since the site is still in beta it is not yet available. For my demo I started with the Ready-Made Powtoon called ‘Increase Conversions’. There are several other templates you can choose from including ‘Compare and Contrast’ for comparing products, ‘Big Announcement’ for advertising special offers and ‘Sell Sell Sell!’ for selling products. Once you’ve decided on a template you are taken to the editing screen which looks similar to PowerPoint at first glance, albeit a much more simplified version. You’ll notice right away that the majority of standard PowerPoint features are missing and have been replaced with very basic ones. On the right hand side there is an image library with figures, props, backgrounds, speech bubbles and the handy animated figures that I used in my demo. If you want to use your own images or backgrounds you can easily import them from your computer by clicking on the top bar. The options for transitions between slides are also on the right hand side as well as the choices for animating text. On the left side, you can see your slides and what transitions you have applied. The bar at the top of the screen has sound and text options and the bar on the bottom is the slide timeline, where you can scroll through all of your animations and images in the order they appear. In terms of the functionality of the individual features, I’ve broken it down into sections below. 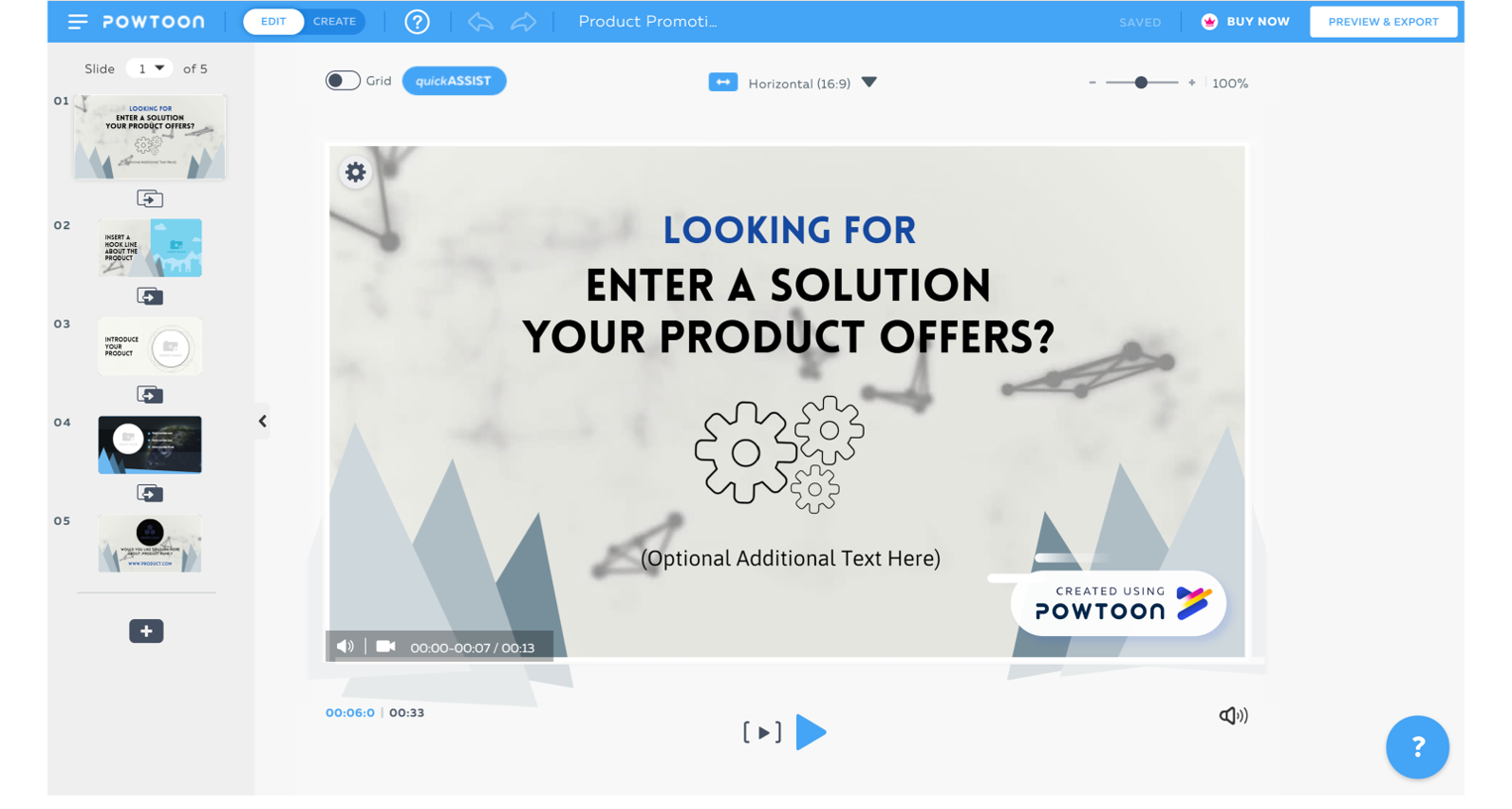 This feature replaces the animation pane on PowerPoint, and I have to admit it is much easier to use. However, there are multiple unfortunate limitations. First, each slide can only be 20 seconds long. Since the site is free to use one cannot make extremely long and complex slides but instead one must settle for making more slides that are simpler. Another issue is that you cannot be precise with timings. Animations can only occur within .5 seconds whereas in PowerPoint there are no limitations (no really, even when Microsoft say something is impossible!). The third obvious issue is that the amount of animations one can choose from is extremely limited. Whereas PowerPoint has close to 150 animations to pick from, Powtoon only has 12. 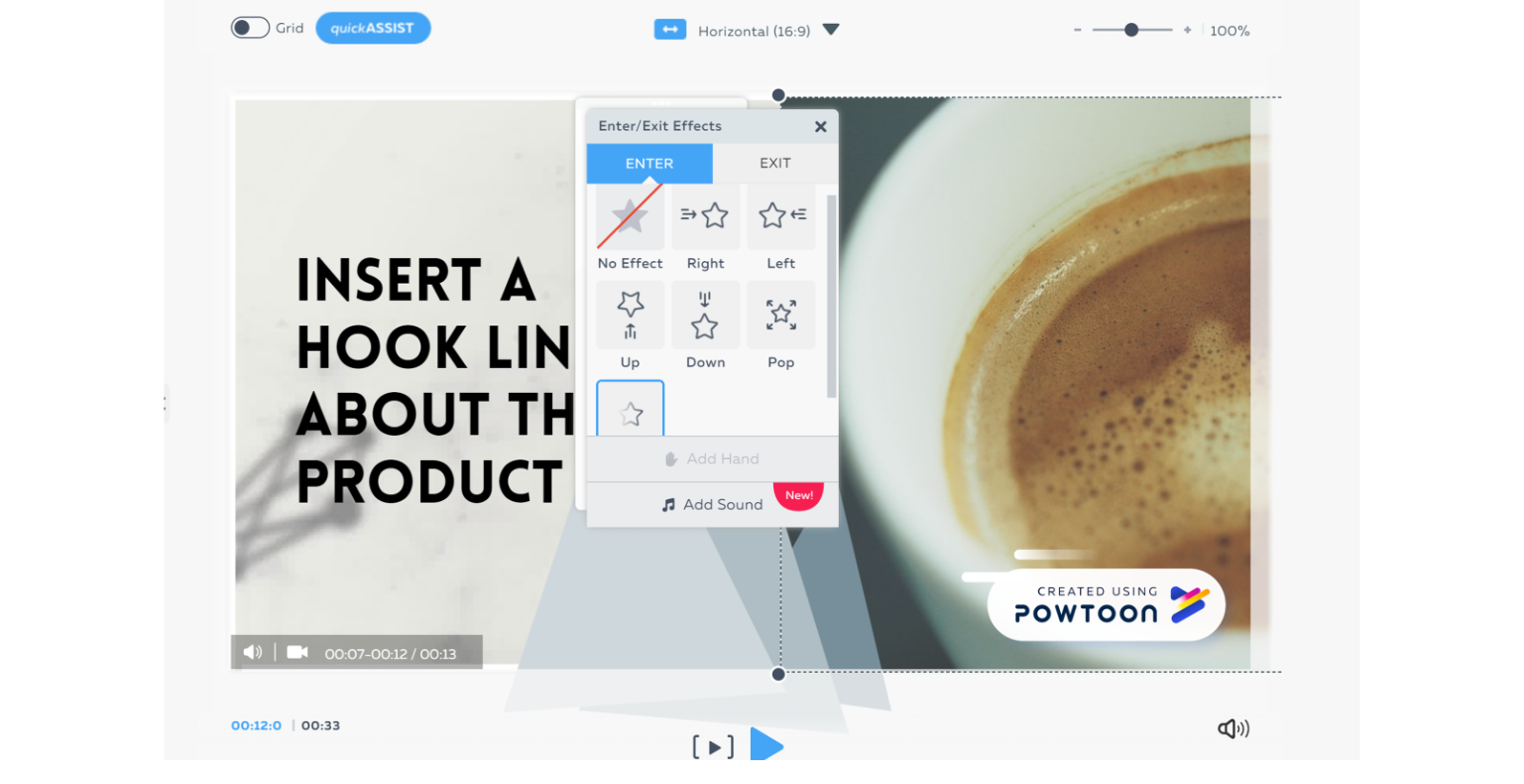 This is another area where I felt there was an obvious lack of customization – a theme in this Powtoon review. This tool only lets you use one sound in your presentation. For presentations where you need multiple audio files embedded this is a pretty obvious issue. If you only rely on music in your presentation you can create a short, snappy story but it means – for the most part – you’ll be relying on text to do the heavy lifting. Using narration allows you to keep the slide free from words. It’s unfortunate you can’t mix both to achieve the best of both worlds.

This is one of the things that I really enjoyed while I was making my demo. Powtoon allows you to put animated GIFs into your presentation that animate constantly on the slide, even while you are working (but of course beware of distraction). On PowerPoint these GIFs will remain frozen until you are in slideshow mode. If you have a premium Powtoon account you can choose between a couple different styles of imagery for your presentation but unfortunately with a free account you are limited to one.

Powtoon’s transitions are pretty fun to play with, especially using the ‘hands’ for entrance/exit effects. They are all very dynamic and this contributes to the fact that all of their presentations are exciting to watch. Transitions are helpful in making a presentation flow, so you can follow characters from one slide to the next or show some kind of relationship between two distinct points. Being able to use transitions easily and effectively is a really cool feature here and one that definitely helps make Powtoon’s results more engaging.

For someone who is new to creating presentations, Powtoon is very straightforward and easy to use. The two most complicated aspects of PowerPoint, animations and timings are simplified with Powtoon and one is left with a very intuitive interface. Creating a slide which uses animation is as simple as placing objects on the screen, dragging the timeline to decide when they appear and disappear and picking an entrance and exit effect from a drop down menu. On PowerPoint one must fiddle with the dreaded animation pane where long lists of animations quickly pile up. In addition, each element you add on a slide in PowerPoint adds more clutter unless you make them hidden, but that can become very confusing. Powtoon also manages to avoid this issue with their timeline structure. All the other functions within Powtoon are also intuitive, like adding and animating text and images. However, one obvious complaint is that there isn’t an undo button and that keyboard shortcuts don’t work, which makes things frustrating at times especially for more experienced users who are familiar with PowerPoint.

It goes without saying that compared to PowerPoint, Powtoon gives you very little freedom. However, at the very least it allows you to animate elements (in a limited way) very easily and since you view your slides in a timeline instead of a long list of animations you don’t have the issue of many elements crowding your slides while you are trying to work. However, I think that a lot of the functionality would need to change if Powtoon want to be considered an alternative to PowerPoint, for example adding more animation options, allowing you to import PowerPoint decks and giving you more freedom with timings.

In the end, Powtoon is most suited for people less experienced with PowerPoint who are looking for a simple interface to create quick marketing presentations. Powtoon definitely isn’t appropriate for making large decks with complex animations, but rather simple and short commercials. The greatest benefits are definitely its speed, (to make a very complex one it would probably take a few hours max) and the fact that animations, transitions and timings are very simple to do. It only took me about 20 minutes to figure out all of the functions on the site and making my demo presentation only took me around an hour and a half. So while I don’t think Powtoon is ideal for all presentations, I think it still has something interesting to offer to its target audience and I can say I recommend it.

Glisser is an online platform that allows you to create interactive presentations that can be used for marketing, training or any other type of events. The site has different functions available for presenters, attendees at events and event planners which all focus on allowing for increased presenter-audience interaction. Since creating engaging visual presentations is what we do, I decided to take a closer look at Glisser and see what it’s all about and how the various functionalities work. 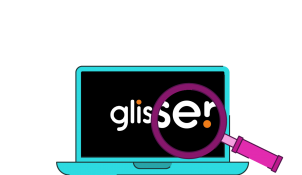 Recently I was made aware of an add-in for PowerPoint called YAY Images that allows you to search for images by different parameters within PowerPoint, and preview stock images on your slides before purchasing them. If you’re curious as to how YAY Images performs and how this compares to other stock imagery services, just keep reading... 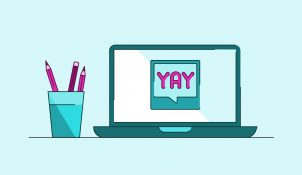 There’s a new feature in PowerPoint 2016 called ‘Screen Recording’ that allows you to record video (exported as an MP4) of hand-drawn sketches, which can serve as a great tool for many different applications, including presentations, eLearning and training. For anyone who is new to the Screen Recording tool, this blog will serve as an easy introduction on how to best use its functionality and get the best results... 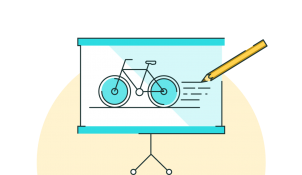 BrightCarbon staff are knowledgeable with excellent skills, and are unfailingly enthusiastic for each new presentation.