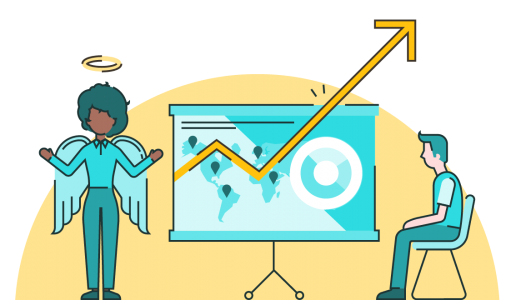 Just how easy to present are those incredible slides? Here are a few tips to make your presentations more…presentable.

Visual, animated presentations are the greatest thing since sliced bread. But just as I’m sure people went over-the-top with their sandwiches once sliced bread was invented, so too do people tend to go overboard with their visual presentations. While whizz-bangs, sparkles and visual delights are great, spare a thought for the poor soul who has to present the deck, and even more so, for the unfortunate souls that have to sit through it.

I’d like to make the case for a balanced approach to animation – one that treads the fine line between underwhelming and overwhelming (which you might think would be known as ‘whelming’ – but isn’t).

I am both a presenter and a slide creator; I present decks that others create, and create decks others present. I also create and present my own decks. Of the three, you can bet your bottom dollar that it is the third option I prefer. There is definitely an arguable case that it is easier to learn and remember material you have created yourself. But it is also true that if you have been lined up to present a deck, you carry with you an innate sense of what the deck needs to be, how it will be presented and how you can cover the information most effectively. These are all useful things to bear in mind when you begin putting your slides together. Sticking to their guidance will make your slides easier to present, and easier to understand.

The problem is that if the two processes are separated, the same sensibility does not carry across: people who create slides (but don’t present them) tend to try to impress, to ‘over-design’ and aim for style over substance. The results often shine as a piece of design or animation, but fail as a piece of effective communication. The audience is wowed by what they are seeing but struggle to follow the story, pick up on key messages or understand the benefits.

Ideally, every presentation would be created its presenter. But the realities of working patterns, departmental responsibilities and turnaround times, mean this just isn’t practical. So instead, I’ve put together a few pointers to help people creating presentations – people like you – think like presenters do, to help you strike the right balance between impressive and informative.

How many is too many?

One of the first things to be aware of is how many animations you’re using on a slide. Animations are critical in helping the audience understand your message. They allow you to show something happening, rather than just telling people about it, they make your content engaging and compelling, and they can also help you break down your message into manageable, bite-sized chunks.

The problem is that people tend to get animation-happy, and overload the slides with effects. What is an effective way to introduce an element quickly becomes less effective if each of the 20 objects on screen animates in individually. Similarly, showing a customer’s journey through departments is a very clear way to tell a client communication story, but is somewhat detracted from if the customer spins, changes colour, grows & shrinks and pulses while he is making his way.

The problem for presenters is that it is very difficult to compete with an animation. When things are happening on a slide, the audience’s natural curiosity gets the better of them and they pay attention to the slide until the change or animation is resolved in some way. While you can talk over an animation, it is often best to wait until it is complete (and the audience’s attention has returned to you) before you carry on. A five- or six-second animation sequence leads to an uncomfortably long silence, and a challenging gap across which to sustain a train of thought.

While there is no answer to the question ‘how many animations should I have on a slide?’ – I can say that sticking to the advice ‘Enough, but no more than that’ – is a good way to go.

Was that boomerang necessary?

You also need to very carefully think about what your animation is actually aiming to show. Once people discover the animation section of PowerPoint, they often get a bit excited and go a little effect-crazy. It’s very tempting to use one of everything – maximise on the variety, and throw in everything including the kitchen sink.  It doesn’t take long to realise that this is one of the very worse things to do. Animations used in this way become a complete distraction – an exercise in ‘I wonder what effect is coming next’ rather than ‘I wonder how this solution can help me’. Apart from being annoying, distracting animations pull the audience out of the story – they break the fourth wall.

Animation in PowerPoint can do a lot – that doesn’t mean it should do a lot. (Beginners, head over here to become a ninja in seven easy steps, or take a look at Level 2 if you’ve already got the basics down.)

PowerPoint’s slide transition can be rather distracting too, and not in a good way. Avoid some of the cheesy and downright baffling options that will divert your audience’s attention away – you can even go as far as to create your own slick transitions if none of them are working for your content.

A better approach is to completely reverse your train of thought. Instead of looking in the animation menu and thinking ‘I wonder how I can use that’, instead you should start by thinking ‘what do I want to show’ – then search for an animation (or combination) that can help you do that. Doing so will help you focus your effect on what’s important – telling your story in the most effective way.

PowerPoint allows you to have animations fire on a click, or to run-on automatically after the last. Both have their uses. Think about when to click and when not to click. Where are the natural pauses in the story? When might the presenter want to embellish or explain? When will the audience need a moment to take in what they’ve seen? Singers are taught to sing through phases, not through bars. They pause to breathe when it makes sense for the melody. The same is true of a presentation – you should add in a click at the end of each idea, each point or each natural break in the story.

At the same time, you don’t want to have to click after every single animation. Don’t be afraid to run together effects that make sense as one continuous motion. If something is moving, then zooming into the slide to disappear, you don’t need a click for each animation – it can run as one string. Try to get into the habit of asking yourself: ‘how would I present this?’

If I were in your shoes

Make sure you have an awareness of how your presentation is going to be perceived by the audience. You want your slides to be saying the right things, but you also want them to be presented in the right way. Audiences are going to be seeing this information for the first time. Although it might be old hat to you, it’s not to them, so don’t be too quick to remove elements from slides as new things are added. Have your audience had a good chance to study and understand them? Have they seen everything they need to see? This is particularly true of data and charts – but any kind of visual carries the same risk.

Audiences also often make notes – and look away from the screen. What labels or colour-coding can you use to ensure they can quickly get back on track?  The presenter can’t constantly be reminding the audience what they’re seeing; the visuals need to do some of the heavy-lifting of the message.

Think about how you can allow the presenter to shine. Add in opportunities for them to interact with the slides – perhaps things they can ‘push’ and ‘pull’ across the screen – which are easy to create with motion paths and practised timing. Give them an easy way to navigate through the slides using hyperlinks. Add in planned opportunities for questions and comments. And use titles that animate in before the rest of the content to give the presenter a quick heads-up.

Above all, it’s really important that people who create presentations think about them from the perspective of the presenter. It’s tempting to throw everything you have at a deck, especially when you’ve learned a new trick or created a really swish design. However, it’s worth taking a step back and thinking about the presentation not only as something people look at, but as a tool that someone will have to use. If you are crafting a spear, it’s a good idea to get the pointy end sharp before you decorate the handle.

The ULTIMATE guide to presentation skills

Presentation skills is a daunting area for many, but being a good presenter isn't something you're just born with. Even the most nervous, or clueless of presenters can learn how to present like professionals just by following some key advice. 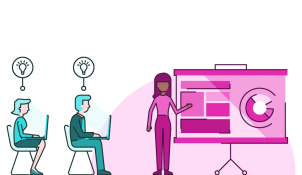 As with many things in life, when you’re presenting, getting started is often the most challenging part. Often, once people get into the flow on a particular slide, they are fine. But starting off strongly, pulling together the first few words or phrases once you've clicked on to a blank new slide is typically something that people struggle with. Here are a few handy tips to keep up your sleeve for those mind-blank moments.

We’d been badly let down and got hold of BrightCarbon on a Friday afternoon – with a Monday deadline! They were reassuring, professional, easy to work with. They listened and delivered great visuals – now adopted across the board.